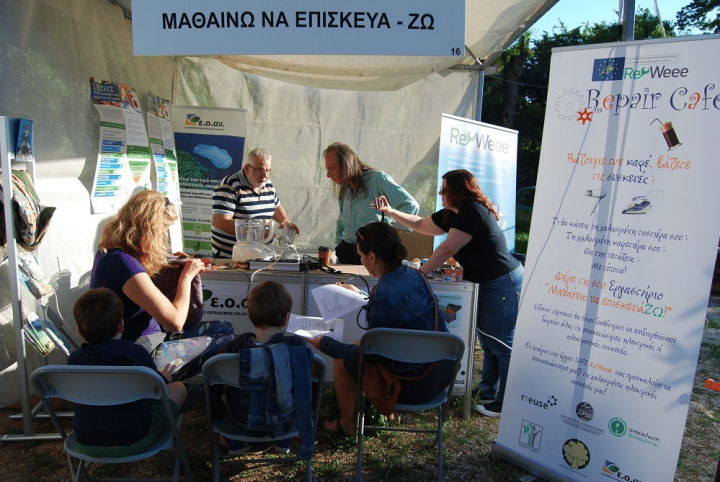 Developing partnerships for e-waste prevention, preparing for re-use and recycling

The ReWeee Project aimed at preventing the creation of WEEE, notably through the development of two WEEE sorting centers in Greece (Athens and Thessaloniki) prioritising the preparing for re-use of WEEE, the development of a web platform for donating and exchanging EEE, and the organisation of events promoting the repair of EEE (Repair Cafés).

To showcase the results of this project, as well as to trigger debates between all the actors of the WEEE preparing for re-use and recycling value chain, RREUSE organised a series of three webinars. Local authorities, NGOs, EU Institutions, universities, waste management associations, manufacturers, producer responsibility organisations, auditors, research institutes, consultancies and, of course, WEEE repairers, re-users and recyclers were among the 69 participants (representing 12 EU countries + UK) who debated on the future of WEEE prevention and preparing for re-use in the EU.   The three sessions covered the following topics:

Session 1 – Developing a WEEE prevention, repair and re-use culture in Europe: After a description by Katia Lasaridi (Harokopio University of Athens) of the WEEE prevention actions conducted in the framework of the ReWEEE project (repair cafés, WEEE sharing platforms, etc.), Chloé Mikolajczak (The Restart project) introduced the participants to the “Right to Repair” campaign that she is leading at EU level to make products as repairable as possible through ecodesign and access to repair information and spare parts. Jana Zurkova finally gave a presentation on Tournevie, the tool library allowing Brusselians to borrow tools for a cheap subscription fee and avoid buying new ones.

Session 2 – The development of standards and technical requirements for WEEE preparing for re-use activities: Dr Efi Tritopoulo (Hellenic Recycling Agency) firstly introduced the development of specifications and technical requirements for WEEE preparation for re-use activities in Greece through the ReWEEE project. She then gave the floor to Maria Tesar (Umweltbundesamt) who is finalising a study, ordered by the EU Commission, on the development of minimum WEEE treatment requirements at EU level. Fanny Rateau (ECOS) then described the position of civil society organisations on the importance of setting higher e-waste minimum quality rules in the EU. Astrid Lebrun-Frisdal (Ecosystem) then shared the point of view of a French Producer Responsibility Organisation on the implementation of WEEE preparing for re-use standards in France.

Session 3 – WEEE prevention and preparing for re-use in the EU: After a speech from Maria Banti (European Commission – DG ENVI) explaining the Commission’s approach to reducing the quantity of WEEE going to waste in the EU, Haris Angelakopoulos (Electrocycle) described the ReWEEE project with a particular focus on the two sorting centres dedicated to the preparing for re-use of WEEE that were developed in Athens and Thessaloniki in the framework of that project. José-Manuel Portas (AERESS) then shared a video showcasing the WEEE preparing for re-use activities of the social economy enterprises that are part of its membership.

The agenda is available here.

If you have any questions on this event or the project, do not hesitate to contact Mathieu Rama (mathieu.rama@rreuse.org).